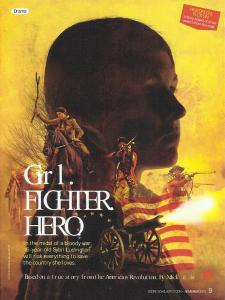 Some of my colleagues were complaining recently that kids today don’t have much in the way of grit, meaning that indefinable resilience that pushes one to overcome hardship. I’ve had enough kids with runny noses whine about needing to call home sick to think maybe it’s true. Then again, as I write this I’m picturing the faces of former students who overcame poverty and homelessness to earn college degrees. Whatever the case, “grit” is an important “soft skill” worthy of our attention. It can be taught, and a great way to teach it is by sharing the story of Sybil Ludington.

Few folks outside upstate New York know much about Sybil–if you’ve ever passed through Carmel, maybe you caught a glimpse of a statue depicting her grit—but she’s considered a hero of the American Revolution.

When General Tryon’s British fleet landed near Danbury, Connecticut, Sybil leapt upon her horse and rode forty miles in the dead of night to call to arms the American troops. She was just sixteen at the time, and her grit and determination is believed to have saved the Hudson Highlands from invasion.

Sybil’s story is a compelling one, and the best way to share it is through a Read Aloud Play. My play about Sybil appeared in the September 2015 issue of Scholastic’s Scope magazine, and this month it makes a reappearance in Storyworks. Imagine your students playing the part of Sybil, or General Washington, or the famous American spy, Enoch Crosby. How much more powerful the story when kids actually get to be Tories and bandits, minutemen, or even Sybil herself?

You can still snag a class set of the Sybil play by becoming a Storyworks subscriber. Storyworks has been providing fantastic language arts content for twenty-four years, and these days it also comes with a host of extraordinary online support material and extensions, all carefully aligned with Common Core standards. On top of that, nearly all my plays appear in Storyworks at least a year before they’re available at TpT. You can check out Storyworks by clicking here.

But Sybil isn’t the only resilient character around whom I’ve built a Read Aloud Play. Deborah Sampson demonstrates grit in The Secret Soldier, as does Sheyann Webb’s character in Gonna Let it Shine and Claudette Colvin’s in The Girl Who Got Arrested. The Newsies, Stolen Childhoods, Box Brown, Jackie Robinson, and Bird Girl are equally great scripts for teaching toughness and determination.

Do any of today’s students have Sybil Ludington’s kind of grit? Let’s hope they never have to face the same conditions. But just in case, consider giving them a bit of training through a Read Aloud Play.